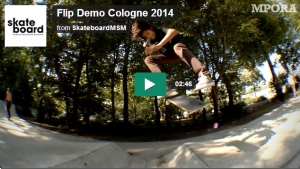 The Flip skateboards team is on tour around Europe. On the 2nd july the team was in Cologne(Germany) at the Kap686 and Lentpark for a demo.
skaters: Louie Lopez, Curren Caples, Ben Nordberg, Matt Berger, Denny Pham and Tom Penny 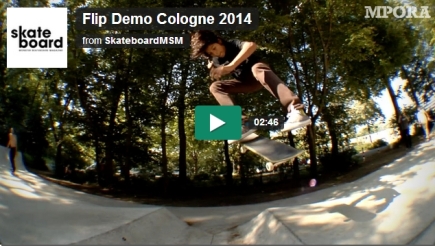 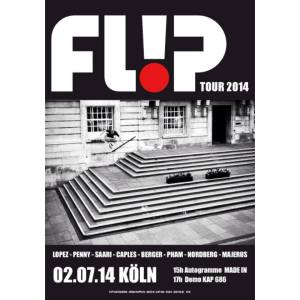 On the 2nd of july the Flip skateboards team will be in Cologne, Germany for the European tour. On the 12 july will be at the Westblaak Skatepark in Rotterdam,Netherlands .
skaters: Tom Penny ,Arto Saari , Denny Pham ,Louie Lopez, Curren Caples, Matt Berger, Ben Nordberg, Alec Majerus

From yesterday is now officially that the 1st ever german skater in the Flip Skateboards team is Denny Pham!

Dani Delgado ,from Esplugues de Llobregat (Barcelona), with the filmer René Antuña filmed a massive technical video part. The video is very well filmed & edited + the tricks are amazing. I have asked him a few questions about the clip and about the future…
Enjoy reading 🙂

the interview is taken from my online magazine nr.5 CLICK HERE and read the magazine

You are a trick machine and your new video part is really sick. When was filmed the part?
Really thank you Luca, This part was filmed in shortly time because i had some footy in my pc not used in edits and some tricks was filmed in differents places of Spain we put everything together to make a better video, If you look the video again you can see many tricks are made the same day i go to this spot. We made this quickly

In how much time was filmed ?
I’m not really sure, I think in 3 weeks . We had a stop of some weeks because my friend is studing and he had important examns and i made a tour with a local shop (Antidot) and other Shop from Ibiza (EZK8) we skate Barcelona and suburbs and we made another video, I hope that will be online soon! jejeje 🙂

Do you remember one of the most difficult trick, with whom you have lost so much time?
The most difficult trick I think is the first one , but i repeated because the second manny flip out was not on my plans jejeje 🙂 .The trick i lost more time with is the noseslide backside lipslide because everytime my tail was hitting on the same ledge, i do noseslide and i must to get do revert on the final for do backlip on the other block. Finally i get this one! jejejej 🙂

With which of the tricks you’re more happy?
I’m Happy with some lines and single tricks, like the square i do nosemanny flip manny 360flip out, is crazy! a lot of tricks on this place. Flip backside pivot Flip out it was fun, the last line and the last day we go film was so good

Which is one of the most beautiful memories of shooting the film?
the last day we go film was so fun every spot we see go skate and i do this last day filming Tailslide intro min 0:20, the line i do frontside flip on flat f/flip tail and flip over the sit min 1:26, Stairs line nollie 180 switch bigspin min 1:36, Single trick lipslide on the rail min 2:07, the line backside pivot and crooks on the rail min 2:09, single trick crooked nosemanual 180 min 3:03

By the way , how was your 2013?
Niceee i filmed little clips and I went to some contest in my country enjoying skateboarding with my Friends, you know was good, every year i learn new experiences and this is the Life jejejje 🙂

You skate for sport 2002 dist (Flip,Indipendent,Ricta,Mob grip) is any new sponsors on the way? maybe shoes?
Yeah! Sport 2002 is Really Good!! they support me on Flip Skateboards,Indy Trucks, Ricta wheels and Mob Grip i have also the support from the Emerica Spanish teams , Lrg clothing, Skullcandy headphones, Maniak Ramps and Antidot Board Shop

plans for the next months?
I not really sure, i would like make more videos and Enjoiying the Skateboarding Life! Ajjajaj 🙂 I would reunited money a travel to visit the california coast in September go skate the new skateplazas and the famous skate spots that we see in the videos , i would like be there

last word or thanks!
Yes, I Would Like Say Thanks To My Family, My Lady, Everyone read this interview, Thanks All My Sponsor for the support,My friends inside and outside in skateboarding,everybody what knows me, everybody feels skateboarding, Everybody likes the video, THANKS for watching and share 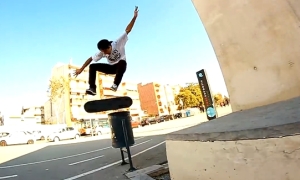 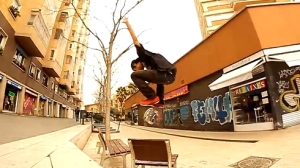 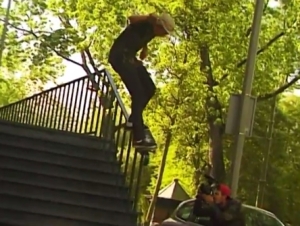 Bert Roeterdink is the new member of the Dutch Flip Skateboards team and here is his welcome clip! Check it out! Filmed by Rambo Crew & Jan Maarten Sneep
FLIP Skateboards for Netherlands by Hardcore Supplies