Manolo Robles presents his PRO deck for Darkstar skateboards with this short and massive video clip. His full part dropping Mid-Summer 2014!
Manolo Robles pro deck”Oracle”: an 8.0″ x 31.6″ deck with a 14″ wheel base.

Check the latest video from Kerem Elver for MOB Skateboards. 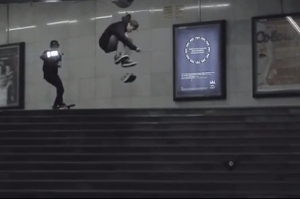 The live streaming/webcast is filmed by T & C Films and it can be found HERE.

the program and all the infos are HERE 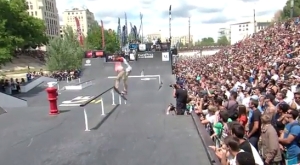 From the 28th May to the 1st of June in Montpellier is taking place the 18th Edition of The FISE WORLD Montpellier.The skateboard PRO contest and the Girls contest are over and here are the results and some videos 🙂

Here is the video of the Vans European Skate trip to Athens, this is only the 1st part 😉
skaters: Sam Partaix and Daan van Der Linden 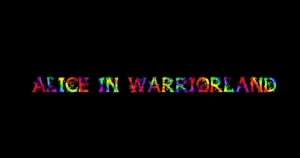 Here is theinterview with Yari Copt about the Warriors Skateboards half lenght movie “Alice in Warriorland”!

NOTE: the interview is taken from my online magazine nr.5 CLICK HERE and read the magazine

From where the hell was born the idea of the title ALICE IN WARRIORLAND?
We always come out with a theme for the decks serie. This year was the TRIPPY serie. We collaborate with some amazing surreal artists for the graphics. Then we wanted to release a little clip of 5 minutes to support the release of the decks but the team filmed in one month more than half of the video so we ended up with a half lenght video warriors… and when you have a warriors video you get stupid scenes. So the perfect idea to go with the trippy theme was that fucked up psychadelic beautiful story of Alice in Wonderland that changed really fast in Warriorland

Have you ever think about Snow White and the Warriors?
Eheheh not yet. Let’s see next spring what serie of decks we will do and if that can work.

Are You satisfied with this work?
Saying that this was supposed to be a 5 minutes clip yes. But not for a real full lenght no. We are working from now till the end of the year to produce a new video for next spring and that should be better. Counting that no one of our riders is professional but everyone study or work i think we still create good clips in such small periods. So at the end I’m happy if who watch the video is happy and wants to go out and skate.

With what are you most satisfied?
Martino Cattaneo filmed 70% of his video part in 4 weeks. He’s a pleasure to watch him skate and he’s inventive and powerful. All the family is amazing. We just have so much fun. Filming the alice scenes was a blast.. we written the story in the sunday morning and filmed in the afternoon in the park with families walking around… it was ridicolous… ahah

Who are the riders in the movie?
All the warriors family and some army riders (army are all our shop riders), but we miss some skaters cause as said this video was done in 2 month pretty much and some skaters didn’t have the chance to film a lot.

Your favorite part in the movie?
Martino Cattaneo part and I like the part of our new youngest rider Gian Matteuzzi (13 yo) that was a surprise of tricks and style.

There have been some serious injuries during the filming? (hard slams)
Yep. Some fucked up ankles as usual and Livio Gritti broke his knee ligaments on a big rail unfortunately. But is getting back already little by little.

Some of the most funniest facts during filming?
All the alice scenes. So unorganized and so perfect at the end! Every character was so hilarious…

In how much time was filmed and edited?
Some tricks were filmed during the year. But when i said i will release the 5 minutes clip no one was happy about their tricks so we actually filmed 60% of the tricks in 2 month and I edited every night for 3 weeks.

What differences can you see between the first video“Come Out To Skate“ and this?
Come out to skate was more planned as a full lenght, so we took the time to film a lot and prepare everything. They are all classic warriors video, some fun scenes that we enjoy to film togheter and the hardest skate tricks we can do..
Then you need to know that our first warriors video (with the 1st w generation) is Memento Audere Semper (1999)
Then we had Senza tempo 1 and 2 and then came Come out to skate, the first video with the new generation of warriors.

What are your plans for the rest of the year?
The decks are in all the best skateshops right now. We will start to film for next spring video and plan a couple of warriors tours, going to some fun events to meet our friends and take some photos for the mags. I will try to spread warriors to new countries and prepare the new decks and apparel collections for next year. So pratically a little bit of work and a lot of fun.

last words or thanks?
I want to thanks all the Warriors, our photographers Alan Maag and Enea Auberson, the skateshops, the distributions, John Cardiel (Warriors’s God), all the skaters that fight to keep skateboarding pure and unique, all our friends and supporters and everyone who push this damn piece of wood!